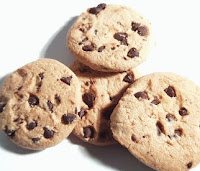 I couldn't resist sharing this fandamtastic chocolate chip cookie recipe. If you click the title of this blog entry it will take you to my favorite recipe web site. That's where I found this one and others by putting in "soft and chewy cookies".
Enjoy !!!

WOW!!! Almost 43 hours without sleep. That's a new record. I haven't gone like this since Thanksgiving 2002 when I went without sleep for 37 hours. I really don't like taking anything to help me sleep because I take prescribed meds for my extremely bitchy back pain. Sleep aids just don't mix well with them. This back pain is getting worse every week and my pain meds are too weak to cut the pain now. I sure as hell won't double up on them. It just ain't gonna happen. Exhaustion will get me soon enough. I'll probably conk out before this evening...I hope.
Alright everybody, today's class will start with a little history lesson on David, my plaything/sexy beast/husband. David is a bit of a Renaissance man. He can do or build anything as long as he can find the plans for it on the web. Hell, he’s remodeled most of the house these past four years. He did the bathroom two years ago and did most of the work himself. Like the walls, ceiling, brand new sub-floor and marble tiles, fixtures, lighting, sink and toilet. The marble tiles are a feat in itself because we have a Pier-and-Beam shotgun style house. You can't put any type of rock tiles down in one of these houses because the floor will crack big time. But he did it and it looks fantastic. Then we had Re-Bath come in to change the bathtub to just a shower And replace the window with glass bricks. It's been worth every penny. He's SO proud. He just beams every time he goes in there to admire his handy work, which I have to say he did an outstanding bang-up job.

NOTE: The following all took place way before we renovated the bathroom. All names have been changed to protect the innocent. Please don't do this at home...we are professionals.

Well, David is all well and good when it comes to working with wood and electricity. Plumbing on the other hand can lead to a fiasco. Like the first time he changed out the toilet’s tank rubber gasket thingy. You know, that little rubber thingy between the tank and the bowl. It keeps the water from seeping from the tank and all over the floor. Our toilet was leaking pretty bad one day and hubby/Renaissance man knew what the problem was and thought he would change it out. Hey, it’s just a gasket, nothing big, right? WRONG !!!! 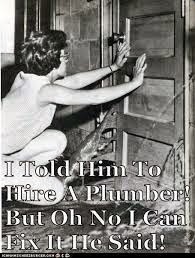 He emptied the tank and took it apart and had a look at the gasket ring. Okay, let’s go to Home Desperate Depot and get a new one, shall we? One hour later he comes home with a few extra goodies and the gasket. I should never let him go to his “Toy Store” alone because things fall into his cart “by accident” and he pays for them without noticing. So he says.
Anyways, he put on the gasket thingy and tank and instead of just putting a little water into the tank to see if it leaks, he fills the damned thing. Low and behold, water is in the hallway all over the brand new wood flooring he put down only a week before. I look in the bathroom and he’s using my nice expensive towels to sop up the water!. I nearly lost it right there. But no, no. I’m holding my temper. I’m not going to be a bitch about this. Just hold your temper girl and stay away from the sharp objects in the kitchen…for now.
He takes the tank off again and has a look at the gasket to see what happened. It’s completely ripped. He tightened the bolts too tight and it smashed the thing and ripped it. Hmmmmmm… okay it’s time to go back to Home Depot again and get another one. he comes back an hour later with more “cool tools” that he just can’t part with and the new gasket. He put the toilet back together, tightening the bolts… just a squeak. Mmmkay, that should do it. He puts a little bit of water into the tank and watches for drips. Nothing so far ... alrighty. He calls me to check his work. Why! Why does he call me to check his work? He does this to me every time he finishes a project. Is that a man thing? Wait … I know this … ummmm is it to get recognition for a job well done? It is!! Yeah, I thought so. 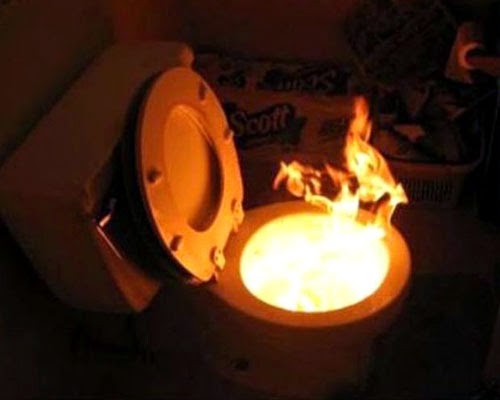 Well later that night (actually early Saturday morning) I go into the bathroom, and there’s water everywhere! I call out for him to get his ass out of bed and come fix this thing. He just shuts off the water and helps me clean up the mess. He’ll take it apart in the morning. In the meantime, we are without potty privileges.
Next morning before I get up, he is tinkering with it again. Even has a new gasket and some new “toys”. I’m thinking he must be on first name basis with everyone at HD by now.
He puts the new gasket on…ALRIGHT!!!! No leaks. Coolness. Now I get to use the can. Well I do my thing and go flush…water starts gushing!!!! I’m screaming by now. I run for the phone to call the plumber. Finally, find one who will come out to us from San Marcus. 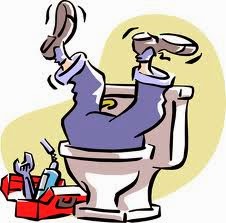 The guy pulls up in this humongous red truck. This is cool, he should have everything he needs in there to fix this. I have no worry. Hubby won’t be going to HD for more toys…he can go out to the truck and drool with envy at the plumber’s toys.
To make this looooooong story short cause it is a long one, the plumber just tweaked the bolts a bit and it never leaked again. I could have killed David! This cost us $165 big ones…on a Saturday… and all he did was tweak it!!!. Shit !! Needless to say …I now have said plumber service on speed dial, which we have had to call out to the house 3 times since. For other problems, that is.
Soooooo… class what did we learn here? Yes, that’s right…keep David away from the plumbing and go with him from now on to HD so he doesn’t buy stuff that just leaps into his basket.
Class dismissed. See you on Monday.