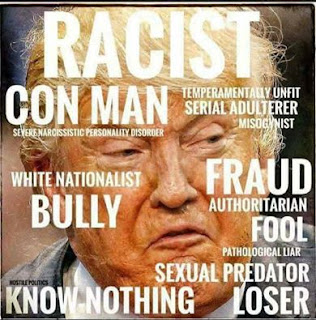 Well, it's official. That dumbass trump won the electoral college yesterday so he is going to be the next president.  What makes me really pissed is that Texas was the icing on the cake. Yes, these Republican ass wiping rat bastards went and wrote him in. So! As of now, I will not recognize him as my president because he's going to probably kill us by provoking China. He will remain Trump, not Mr, not president, but just plain ol' trump.  Hell, I won't even capitalize his name. That's how I will refer to him when I blog about him, among other names. I will not be taking anything that portrays him in a bad light down off my blog. In fact, I will be adding all sorts of funny stuff when I find it. So if you are a trumpkin, too fucking bad. Suck it up snowflake, it's going to be a rough 4 years for you because there are lots of people that hate the commander in cheeto and I'm going to have some fun before he blasts the planet apart. 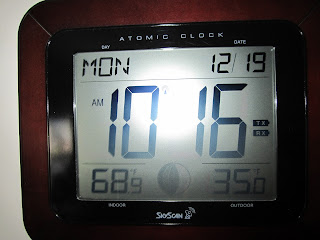 Yesterday, David had to take the batteries out of the weather unit that we have outside to measure the temperature. The indoor unit was saying that it was 131 degrees F. He ran out front to see if there was a fire on our front porch. Nah, not even. I wished he had taken pictures of the reading so I could show y'all.

So, this morning, I went to see how cold it was and the reading said "0F." I told David that it's so cold out that the thermometer was reading "Oh Fuck." It was really about 26 degrees F. at that time. The second picture I took of the unit was at 10:16 this morning and it was 35 degrees F. It had warmed up a bit. It never got above 41 today. It is supposed to be the same in the morning again. Cold as fuck with wind chills reaching in the teens. This weather is crazy. It's supposed to be in the 60's and 70's next week. 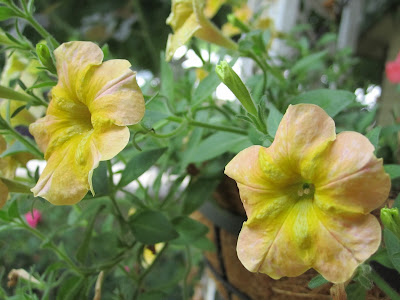 Because of the cold weather I had to bring the flowers in early. I never worry about it getting cold like this until January. Anywho, my Mexican Sunset petunias are going crazy trying to figure out what to do. They crave light, so I'm going to have to drag out the bloom light and set them up in a closet somewhere so the light doesn't hurt anyone's eyes. Otherwise, the plants might go into some kind of shock. It get's very dark here even though we are in Texas. In our area, we have a lot of low clouds. off the Texas coast
I had a doctor's appointment about my joints getting real bad 2 weeks ago. He's trying me on several drugs to see what works best. So far it's nothing. Arthritic pain in my fingers, knuckles, wrists, and elbows are to the point that it may be awhile before you see anything during the day here on my blog. I'll try to post as early as I can, but it all depends on the weather and what new ploy I'm trying to loosen up my hands. I need to go find me some hand warming gloves with the fingers ends exposed. I gotta try something, so that's next.

The thermometer reading OF did make me LOL. You might look at compression gloves for the arthritis as well as warming gloves. Topical analgesic and a variety of gloves get me through typing and sewing.

They do seem to like him here in Texas, I wonder if they still will two years from now.

Yes. Yes they do. Many of them are idiots from the Governor on down.

Thanks, I didn't think of compression gloves. I'm already using Aspercreme. It seems to help with the pain but my stiffness in my hands is killing my day. I hate those cremes that smell like mint. But ya gotta do what ya gotta do.

"Commander in Cheeto" LOL! And you know that I approve of your plan to become a Fingerless Gloved One. Welcome to the club!

i can't even call him trump. asshole dumb fuck sounds so much better. well, i keep my house at 52 degrees and my thermometer is not broken. it keeps people away...even my kids!

I still shake my head in disbelief
the Ol'Buzzard

Try some medical weed! My mom is on it for her arthritis.
I don't even want to mention the "T" word!