A circus owner ran an ad for a lion tamer and two people
showed up to be interviewed for the job. One of them was
a retired fireman in his late sixties and the other was a
gorgeous blonde in her mid-twenties.

The circus owner sits them down and tells them,
"I'm not going to sugar-coat it. This is one ferocious lion. He
ate my last tamer so you two had better be good, or you're
history. Here's your equipment - chair, a whip, and a gun.
Who wants to try out first?"
The young woman says, "I'll go first." She walks past the
chair, the whip and the gun and steps right into the
lion's cage.

The lion notices her entry and starts to snarl and pant.
He roars and begins to charge her. About halfway there,
the blonde throws open her coat revealing her beautiful
naked body.

The lion stops dead in his tracks, drops down on his belly
and sheepishly crawls up to her. He starts licking her feet
and ankles. He continues to lick and kiss her entire body for
several minutes and then rests his head at her feet.

The circus owner's jaw is on the floor.
He says, "I've never seen a display like that in my life."
He then turns to the retired fireman and asks,
"Can you top that?"

The tough old smoke-eater replies, "No problem, just get that
lion out of there." 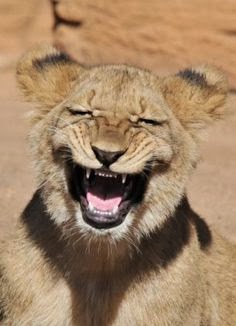 Perfect beginning to my anticipated hectic day ... THANKS!!

My first belly laugh of the day -- thanks!

LOL, didn't see that one coming at all. Pun intended.